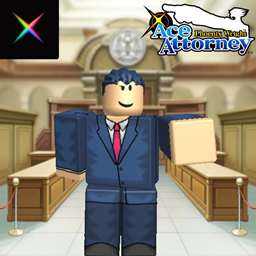 Ace Attorney games were quite the colorful bunch. Fighting against prosecutors in court, pointing out the witnesses' really-easy-to-figure-out lies, and crying at Maya's stupidity.

The prosecutors in particular spell out their quirkiness in caps, for they each have interesting personalities; you have prosecutors who aren't afraid to forge evidence, coffee-addicts, and even blood-thirsty criminals... and of course, they all have an interesting backstory to go with. Except maybe Payne, but he does not exist.

So when I heard there was an Ace Attorney roleplay game on ROBLOX, I was fairly excited... I could finally be toxic and get away with it! Eventually, the excitement wore off, as I noticed the faults of the game... what they are? Why don't you just read?

Just a sidenote: This review assumes you atleast know how the actual Ace Attorney games play. 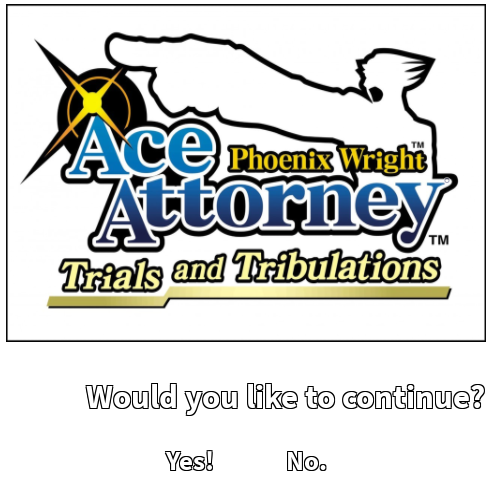 When you start up the game, you are greeted with this rather peculiar title screen.

I have a question already... why is the logo for Ace Attorney - Trials and Tribulation there? Did they not want to make a custom image? Did they not have enough ROBUX? They can afford hats though, right?

The title screen asks you a rather strange question: "Would you like to continue?" Continue what, I wonder...? Under the question are two options you can click on, "Yes!" and "No." Clicking on "No." will yield no results, hovering over it will cause the option to change to "Never!"... I don't see a point in this, but hey, why not? 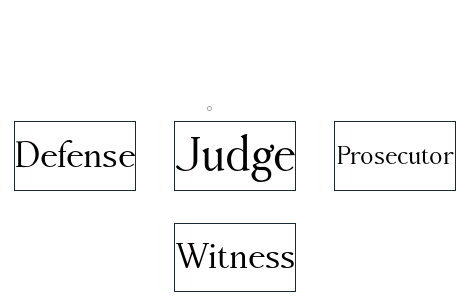 When clicking on "Yes!", you will be given a choice of 4 roles: Defense, Prosecution, Witness, and Judge. As a result, only a max of 4 players can play on a server... Hideously low. Perhaps the game should allow for more witnesses? That way, cases with multiple witnesses become easier to do.

Also, not to be nitpicky, but doesn't that screenshot seem a bit empty to you? Perhaps a "Choose your Role" above the options wouldn't have hurt... 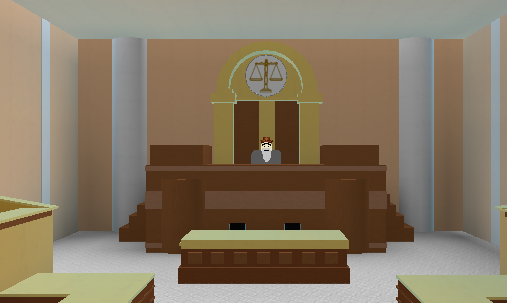 This is the courtroom you find yourself in when you choose a role. What's notable about this game is that you cannot move around at all; you stay in your place at all times.

And yes, this picture is edited to cut out the judge. ;) 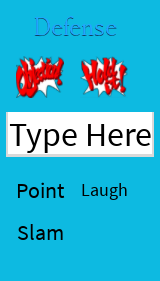 On the right side of the screen is a box which you can use to chat. The special actions and color change depending on which role you are. For whatever reason, witnesses have no rights to do anything. Depressing.
Incase you haven't noticed: "Take That!" is nowhere to be seen... I wonder why?

Perhaps it's because this game doesn't support evidence. Yes, you heard (saw) me right: There is no way for you to present, or create evidence in this game, forcing roleplayers to write down evidence "presented" in a Notepad file or try to remember it. (Not to mention: No evidence in an ACE ATTORNEY roleplay game...?) Another problem with this is that when a player leaves and another player joins, they will not know the details of the current roleplay, forcing the other players to explain it to the newcomer.

On top of that, there is no actual way to start or record a witness testimony, so that's another thing players have to write down/remember... not to mention witnesses may suddenly change their testimonies during the cross-examination.

Also, there is no chat log, which means if someone gets interrupted, they have to say it all over again, which can be quite annoying when it's a whole sentence!!

Oh well, atleast you can slam the desk in this game.

Clicking on this little button opens a sidebar, where you can choose which piece of pre-determined music you want to play. The music selection consists mostly of typical Ace Attorney tracks, like Cornered or Objection! 2001. It even includes sad music (Classroom Trial).

Small question, though... where is the Testimony music? You know, Moderato and Allegro? How are you supposed to testify when there is no fitting music playing in the background!? ... Maybe it's not as big of a problem as I make it out to be, but I still think the lack of Testimony music is very shocking, to say the least. Classroom Trial is apparently more important than testimony music, I guess.

Also, is it just me or is ApolloObjection broken? When you click on it, no music plays... Very sad, I liked to violently consume that track.

Somewhat related: "Objection!" and "Hold it!" are only available in Phoenix's voice. Edgeworth must be screaming inside right now.

Ace Attorney is a unique roleplay game that has a good idea, but doesn't execute it very well. I do think that this game can work... However, faults, such as the lack of evidence and testimony support aswell as no chatlog make it not as good as it could be.

Furthermore, the game suffers from various bugs. Sometimes, when two messages are sent simultaneously, the game breaks, and text messages can no longer be sent. The only way to fix this is to use an "Objection!" or the judge's gavel.
Witnesses are hopeless in this situation, because they don't have access to these tools. The only thing they can do is try to change roles. It is quite irritating.

You may have noticed that this review is not that long... That's because there isn't really much to say about the game; it's just a roleplay, after all...

What I want to say is that this review is not meant to insult you; I just try to make it clear that your game has problems. Please don't take it to heart... I'd appreciate it. :)

UPDATE 07/05/2021: It seems they were planning on doing an update to the game that'd fix all my issues here and more... But, they posted that back at the beginning of February... Are they working on it, even? It seems we have to wait a little eternity. No offense, but... I'd appreciate an update on development or something. Unless that's on Discord. To be honest, I don't use that...