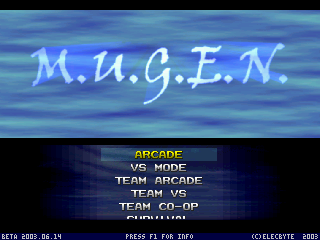 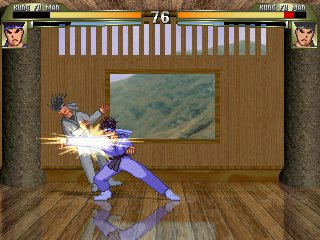 
Have you ever asked yourself, "What if Chun-Li fought against a dinosaur?"
...Wait a minute...

M.U.G.E.N allows you to make your strangest dreams come true; almost everything is customizable in this engine. You can download resources for the engine on the internet, or make them yourself if you want to, though that requires programming knowledge.

The best thing about it (in my opinion) is that it's not too difficult to use. Even you could make your own character once you learn the basics... This is coming from someone who never made a character for M.U.G.E.N before. Maybe I am speaking too soon. Who knows?

Compared to other fighting game engines (half of them abandoned), M.U.G.E.N has a respectably sized community. Recent, finished tutorials seem few and far between, but maybe the older ones aren't too outdated...

Some cool things M.U.G.E.N can do:

The community welcomes you with open arms... Unless you steal someone's work. Then you get banished to the Shadow Realm. Then you'll have to move to another forum, and pray to the gods you don't get caught. But, fortunately for Justice™, you will be caught and forever alone. Because you are a criminal, see?

The screenshots above are of the ancient and abandoned Winmugen, from the early 2000s. Despite this, it runs quite smoothly on newer versions of Windows. Why not have screenshots of newer versions? ...I like old things, OK!? The most recent version available at this time is 1.1, however I recommend 1.0, as it's more stable.

M.U.G.E.N is technically available on both MS-DOS and Linux, however both are no longer officially supported. The former for obvious reasons, but the latter is a disappointment for all...

This section will be used to host my own resources for the engine, should it ever come to that.

I will not host resources from other creators here. What you want is most likely on the creator's site. Or in a warehouse.

How To Add A Character/Stage

Stages work in a similar way, but they do not need their own folder within the stages folder.


If this seems too difficult or tedious, then you can download the program "VSelect" instead. It turns the character/stage installing into simple drag-n-drop. I don't know much about its creators... I think I have to do research someday.