She Ate A Banana (serial)

Snuck past mommy on Sunday, surfing until midnight. All the fancy LED lights were off. Only the laptop remained. A recipe for disaster, perhaps, but who really listens to their parents?
The outcome was predictable. 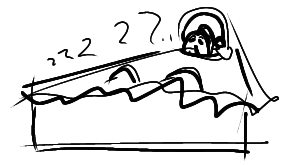 She overslept!! The alarm ringtone rang once. Twice. Maybe even to the power of 10?
It didn't help, as expected. She didn't have an annoying sibling to wake her up, either.
Mom had a day off this Monday. It would be off to a bad start.

Her sweet little daughter woke up in the worst way possible. Mommy had spilled liquid over her head.
The old hag wasn't interested in wasting any time. Tired, she threw her daughter into the living room. "Now, my dear. You have 10 minutes to get to school on time. Hurry."
Hurry she did. Daughter left home beaming with pride. With her pajamas on. And socks.

It is now 8:51 AM.
Spring breeze. Allergy.
She hurried to school as quickly as possible.

8:53, she crossed some roads. Drivers were too busy waiting for traffic lights to laugh at her pajamas.
At last, the bus stop to school. Took a hot minute. Unpopulated. 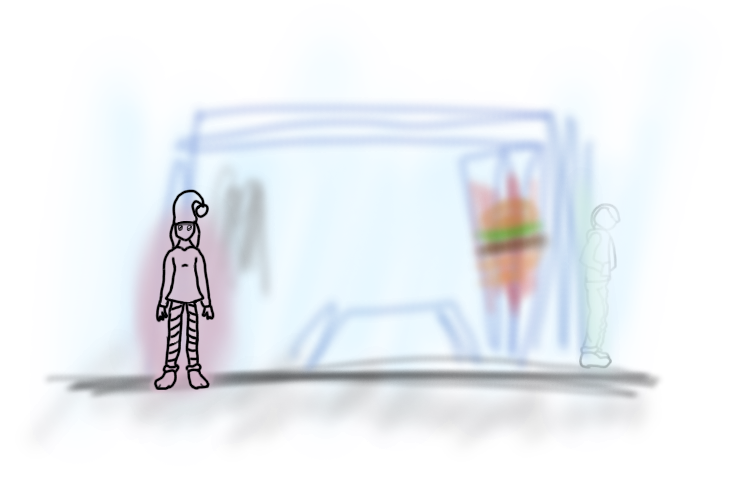 There was an ad for the latest burger: "The Borgar". No one cares.
Reading the bus plan, she was traumatized. Her bus wouldn't come until 8:58 AM. That'd mean, she would meet a springly demise.
The nose died. 30 seconds passed.
There was someone nearby.
He hadn't been noticed yet; the girl was busy dying.
But vice versa? Yes, actually.

She was about to sneeze when this boy decided to hand her some tissues. Looking at the boy, she, uh...
She sneezed in his face. Headshot!!
The pajama-weenie recognized the boy instantly. "How come you are late, Hotte?"
"Hotte". This name caused a ruckus in school for some reason. They're probably not foreigners.
Hotte turned around. Tried to leave.
"Where are you going?"
"Away," he said.
"Could you elaborate?"
"Away. From you."
"Funny," our gal pondered, "are you skipping school?"
"...I wish I had a bicycle."

Three minutes of silence passed before Mariæ pogged out her only sentence in the bus. "Look, we're in Hell Street!! That's where you go shopping on weekends, right?"

At the crossing, right over there, Hell was waiting.
"Humble Alley" would be the final bus stop.

She Hasn't Had A Banana As Breakfast Today

Hotte was running around at the speed of sound to reach class. Mariæ took a walk.
"Don't take too long," Hotte babbled. "or else you're getting a finger--"
She sneezed and got out tissues from her hat.
"...Why didn't you get them out earlier?"
"Not interested."
Hotte noped out and ran. He didn't bother getting her to class. Such tasks are for her to do and only her.

Time no longer plays a role. Mariæ's, after all.
The schoolyard was noise-free. She was lying on top of the only ping pong table in the yard. Laughing. Animating like a snow angel. Only without the snow.
With her hiding spot, it'd only be a matter of time before she would be arrested by the government discovered.

She saw an open window. Someone was there. Mariæ didn't ponder why a teacher would be looking out a window during a lesson. Actually, she knew the reason very well.


"I've been waiting for you." Mariæ used all her power to stand up and say that straight to her face.


"As usual. Go to class."
Mariæ followed her. Into the funhouse they went.


"Mariæ."
"Hullo, teacher! Didn't notice you." Mariæ was joking as usual. They were climbing Up D. Stairs.
"It can't go on like this. It's the fifth time you did this."
"I wanted to go for ten."
"If you don't change, we may have to hold a congress."
Detention did not exist in Mariæ's school. This "congress" thing was its replacement of sorts.
Do something exceptionally bad, and a congress will be held for you. Your parents will take part in it. O the indignity, as a famous train engine once said! Three strikes and you're out.
Mariæ managed to evade the congress all this time, because the teacher be kinda soft tho ngl.
"You're screwed next time," said the teacher. She had been stuck in this demonic loop for a while. Mariæ wasn't worried at all. No point to that.


And so, another week of school would start for her. Technically it already did, but...